Excitement takes over whenever I read someone’s hair expedition. I can relate to most of the stories, yet each one is so unique and so beautiful. I met Chantal a few years back.
Drawn to her hair like a moth to a flame and having just seen her in a production called Le Femme,
I was in fan-girl mode. Imagine my surprise when I found out this sista is not only a Cape Town Natural, but she is also from my hood!
Super proud! This is Chantal’s story in her own words…

Tell us a little bit about yourself. Who is Chantal Stanfield?
I am a professional stage and film actress, theatrical and tribute singer and sometimes an incidental dancer in those tribute shows! I’m 31 and I just realise it’s been about 10 years since I decided to let my hair go and let it be natural. So, it’s my harriet-iversary (‘harriet’: gayle for ‘hair’)! Yay me!

Did you always wear your hair curly/natural? If not, when and why did you decide to?
I grew up knowing that the straighter or gladder (smoother) your hair was, the better. I didn’t really know much else because that was just the general ‘coloured’ idea, I didn’t ever really question it. Every hair salon, everybody else who looked like me had that straight hair so I just assumed growing up that it was ‘natural’, not realising that everybody was probably also doing the relaxer/ straightener thing to get it.
Then, I did a mini-thesis halfway through my Drama studies at UCT that looked at ‘Coloured Identity’ and the issues that influenced and affected us as a people – still, actually! A large part of our positive identifying markers for wealth, influence and social standing came down to appearance, namely lighter skin and smoother hair. This is what happens through the course of more than 350 years of conditioning, of course. See what I did there? 😉
I decided I wasn’t going to conform anymore and have my self-worth defined by straight hair. My curly-bossiekop grew externally defiant in a Cape Town that praised ghd’d (flat-ironed) hair, even though mine was a quiet, personal revolution really. I think it helped my journey in no small terms that most of my time was spent on the creative Hiddingh campus with all the other actors and artists.
This is an excerpt from a poem I wrote recently about that time:
“Campus Hair” – that’s what they called it when my kroes-curls found their freedom
And exploded unbridled, unapologetically, into view.
They thought it a phase of a few years,
Thought I would see my error and once again tame my difficult hair
into calm submission
With green and orange plastic rollers, irons, chemicals, a nightly ‘swirl-kous*’.

Everyone has a favourite “hair story”, would you like to tell us yours?
Well, there are the questions that I have come to expect when someone gives my mop that inquisitive, curious look, such as “Is that your own hair?”, “Is it permed?” and  “How do you get your hair like that?” I try to be generous in my response. But then they inevitably say something like, “I wish my hair could do that” and I bite my tongue to prevent myself pleading, “But you know if you stopped relaxing your hair/ took out your weave, you could discover what you really have, right?” That would open up a can of worms…
One of the best things is that I never had any pressure from family to re-conform to the straightness. My mom even stopped me putting my hair up once and said, “los jou hare bossiekop!” My sister and my niece are also naturalistas.
I blew my hair out properly for the first time in years recently! I was about to do a shoot and I thought I’d make the hairstylist’s job a bit easier and get it sorted at the salon beforehand. It actually didn’t even take that long, just normal wash, condition, blow-out and final ghd. But I was proper depressed for about an hour afterwards. I just didn’t feel like myself. I felt like a fraud walking around the mall immediately afterwards.  I didn’t know what to do with myself but mope around the house until I could wash my hair again and bring back my curls a day later! I suppose it’s a bit of a dichotomy though – how I didn’t really feel like myself with straight hair and felt my personality defined by my curly hair. Surely it doesn’t matter, right? Because your hair isn’t your personality. But it’s very difficult feeling  to describe to someone who hasn’t had the same socio-political and beauty-standard awakening that I had to my hair. They all go hand-in-hand for me.

What has the general public’s opinion been about your curls? Is there a vast difference to people’s reactions from JHB and CPT?
People seem to really like my hair! I think as a public figure, people have come to associate me with my bos-hare. So in that way, I’ve never had any nastiness as such. I do feel though, that Joburg is far more open and accepting of the most creative hairdo’s, headpieces and wraps. My simple ‘fro almost pales in comparison! And that’s despite parts of Jozi being a Weave Dense Area. 🙂  I find in Cape Town that my natural hair is sometimes still a curious oddity.

What is your honest opinion about the natural hair movement?
I think it’s a fantastic revival of what the 70’s and 80’s did for natural hair. It’s a difficult transition to make though because I see how hair politics really permeates my fellow women of colour – so many think they would look ugly, suddenly appear stupid or be less sought-after without the weave, without the bi-weekly salon trips, without the ghd. In fact, I know a fellow graduate who, at the same time as my own revolution, also stopped relaxing her hair and a family member actually asked her if she was trying to look less pretty. There really is a lot of nastiness that comes with change from people who don’t or won’t understand it.

What is your hair routine?
I’ve always loved mousse especially L’oreal ones. I’ve heard rumours of leave-in conditioners drying hair out so I’ve stayed clear of it but I suppose you have to use a made-to-leave-in conditioner as opposed to the normal ones! Right now I’m using Tresemme root-booster or spray-gel (they were goodie bag gifts!), I’ve enjoyed it but am now also using glycerine as per the South African Naturals post suggestions.
I usually apply product, blow-dry and then pick it a bit with a wide-tooth comb (a normal ‘fro comb is too harsh I find). Today I decided though to lesson heat-damage in the long term and have left it to air-dry and then pick it out. I’m trying to get my hair healthier and stem the thinning that’s started. Still looks cool, just smaller! I will use the blow-dryer when there’s less time to dry.

Any last words you would like to add to future naturalistas ?
Take the plunge. You might need to chop off all the damage at first though. I just stopped relaxing my hair, I remember having it cut into layers and then let it all grow out. You’ll never know until you give it a fair chance.  Your reasons don’t need to be the same as mine and neither will your journey be. It’s all personal and relative. There really are many examples of haircuts and hairstyles online for naturalistas so don’t be scared that you won’t know what to do with your new ‘doily’ (Gayle for ‘do’). You will figure it out. I still am a decade later!
*************
Thanks for sharing, Chantal. Good luck with your expedition and may your
star keep shining bright.

*Swirl-kous: a Cape Coloured word for a nylon pantihose which is cut at the leg section, knotted at the foot section and swirled onto one’s head once hair has been brushed around the head. A swirl-kous is used mainly at night to keep the hair straight after a blow-out. 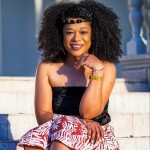 Happily blogging since 2013. I am a natural hair enthusiast who lives in the Mother City with my husband and daughter. Cape Town Curly is about my personal journey towards self love and living an authentic life. I believe in the power of sharing knowledge – when one grows, we all grow.

You may also enjoy:

A guide for first …

My hair journey… the …

Hi, I’m Amanda. Thanks for popping by.